Welcome to “The Brief,” a monthly roundup of Democracy Forward’s latest work to use the law to fight for good government on behalf of all Americans. Read on below for news of our victories, newest filings, latest case updates, and resources to learn more.

In a month that began with Independence Day celebrations and closed with a hearing vividly recounting the January 6th insurrection, there is no place our Democracy Forward team would rather be than fighting for the promise of democracy on behalf of our clients. That’s what we did in July and continue to do each day.

Threats to our democracy continue to play out in Texas where we are in court fighting for the voice of the people in government and more than 2,000 civil servants whose livelihoods have been threatened by Governor Greg Abbott’s defunding the entire state legislative branch.

This month, our innovative legal strategies successfully helped reverse two harmful Trump-era policies: one that weakened anti-redlining protections designed to protect communities of color and another that harmed coastal barriers. We kept a close eye on our loan data settlement to ensure the government was making progress. And we strategically engaged in pending cases opposing state efforts to undermine Medicaid and invalidate informal agency guidance.

Read on to learn more about all our work this month—

In response to our case, Biden Admin to rescind unlawful Trump rule that gutted anti-redlining protections.

NCRC, CRC v. Office of the Comptroller of the Currency

The what? The CRA was enacted to address redlining and secure access to financial services for communities of color and low- and moderate-income communities—services that have long been disproportionately distributed. Banks are required to meet the financial needs of the communities in which they do business by reinvesting deposits back into that same area, instead of investing the community’s money elsewhere.

The Trump administration unlawfully weakened these protections, and did so amid a pandemic, an ensuing economic downturn, and urgent calls for racial justice. It kept the public in the dark throughout the rulemaking process by withholding key information about its decision-making and publicly criticizing community reinvestment groups, such as our clients.

We sued and have now achieved reversal of the policy. The Office of the Comptroller of the Currency’s announcement is a welcome move away from a Trump-era rule that was unlawful and would have disastrous consequences for marginalized communities. We will continue our work with the NCRC and CRC to ensure the government follows the law and fulfills the purpose of the CRA.

CFPB will advance protections for women & minority lending against discrimination as part of our settlement.

Existing data on lending by financial institutions to small businesses and women- and minority-owned businesses is inadequate. The lack of data frustrates the ability of small businesses to detect and address obstacles they face in obtaining credit.

Prompted by our lawsuit, the CFPB recently committed to a September 2021 deadline for the agency to propose a rule to collect and disclose data on lending to women-owned, minority-owned, and small businesses as part of a settlement agreement reached in our case on behalf of the California Reinvestment Coalition, National Association for Latino Community Asset Builders, and small business owners in Iowa and Oregon.

We’re proud of our work with CRC and NALCAB to ensure that this critical data is collected and shared, and to see CFPB’s current leadership affirming its commitment to advancing this critical and overdue rulemaking.

In response to our lawsuit, the Department of the Interior announced it has reversed the unlawful Trump admin “Excavation Rule,” which weakened the Coastal Barrier Resources Act (CBRA).

What happened? The bipartisan CBRA prohibits federally subsidized spending and projects in a system of hurricane- and storm-prone coastal areas. The Act preserves undeveloped coastlines that serve as a buffer for inland communities against storms and sea-level rise, as well as critical habitats for wildlife and fisheries. The Trump-era policy incentivized destructive dredging of protected coastal barriers by allowing taxpayer money to be used for mining sand to replenish developed beaches.

Last year, we represented the National Audubon Society in filing suit against then-Secretary of the Interior David Bernhardt for his unlawful Excavation Rule. In June, a report by the U.S. Geological Survey and U.S. Fish and Wildlife Service documented the many harmful impacts of sand mining on the coastal environment and nearby communities.

We’re pleased to see the Biden administration has chosen to reverse this unlawful, potentially disastrous policy so the CBRA can remain intact to provide coastal communities a buffer against climate change, as well as habitat for wildlife, for generations to come.

And check out this great piece on Audubon’s blog to find out more about the “Decisive Victory for the Most Important Coastal Law You’ve Never Heard of“!

Going to court for democracy: “This is bigger than Texas—and Texas is a very big state!”

Last week, the Texas House Administration Committee issued a memo “regarding the impact of the Governor’s veto of Article X funding to the Texas House of Representatives.” Published by a Republican-led committee, the memo makes the costs of Texas Gov. Greg Abbott’s unlawful attempt to abolish the Legislature abundantly clear: 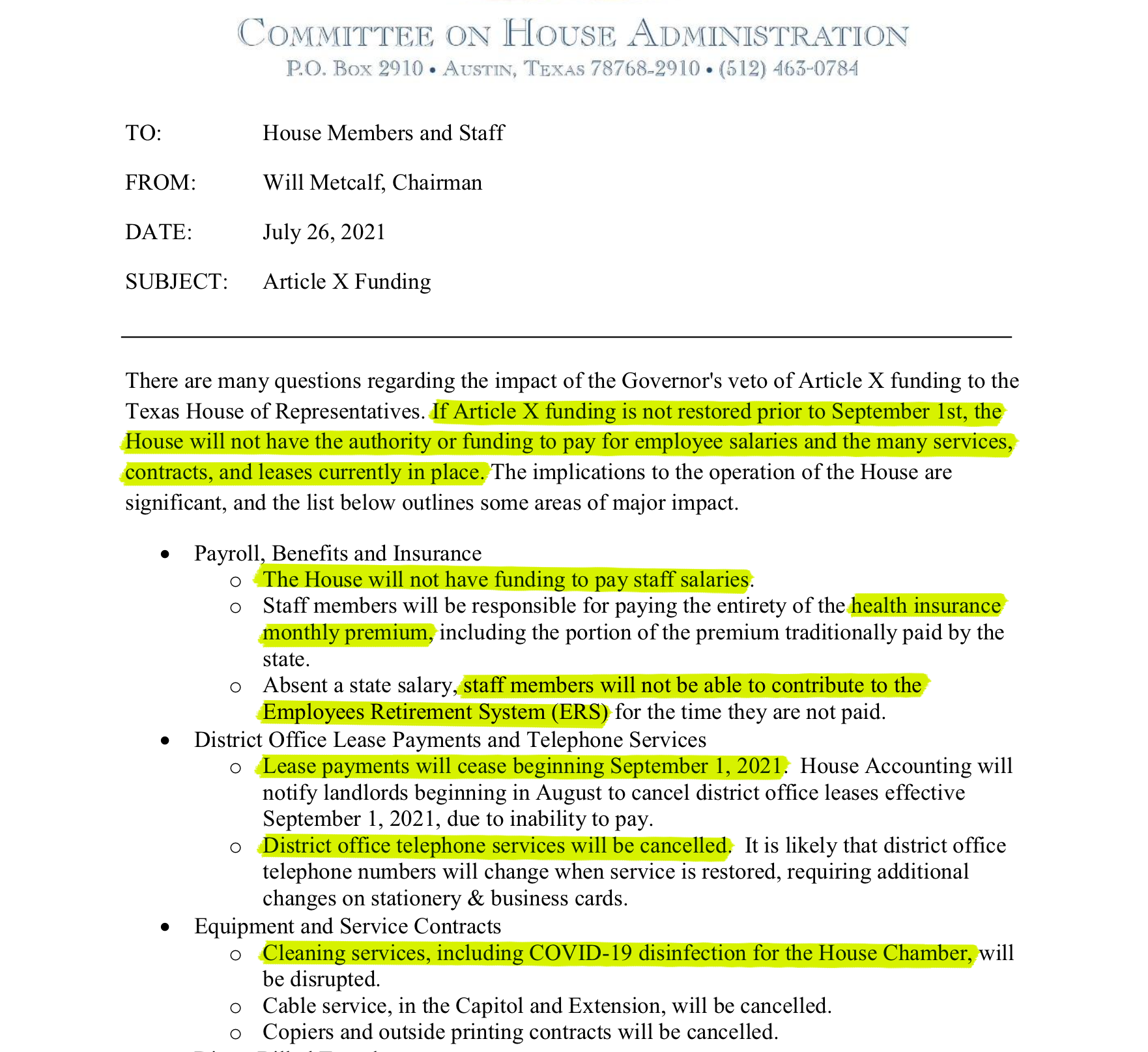 In the midst of the Texas fight for voting rights is Governor Abbott’s unlawful decision last month to veto all funding for the Texas Legislature—effectively abolishing the state’s co-equal Legislative Branch. His move is unconstitutional, untenable, and cruel. It will cost Texas civil servants their livelihoods, strip Texans of access to vital constituent services, and impede the Legislature’s critical work addressing redistricting and the state’s energy crisis.

Donovon Rodriguez, one of the state employees impacted by Gov. Abbott’s veto we are representing, said:

“Today, like every day since the Governor’s veto, I am doing my job as a public servant, working for our community. Members are doing their job to try to serve their constituents. We are doing this work despite Gov. Abbott’s unlawful action to eliminate a co-equal branch of government.

“Today’s memo from the House Administration Committee further reinforces the harm that is being caused by his relentless pursuit of his personal agenda. Gov. Abbott is responsible for this constitutional crisis that is hurting me, my family, more than 2,000 other state staff, and people in communities across Texas.”

Our very own Skye Perryman appeared on Austin’s NPR station KUT and Philadelphia’s WURD “Reality Check” to discuss the dangerous precedent Gov. Abbott’s unchecked abuse of power is setting, and how it will have big implications even outside the big state of Texas. 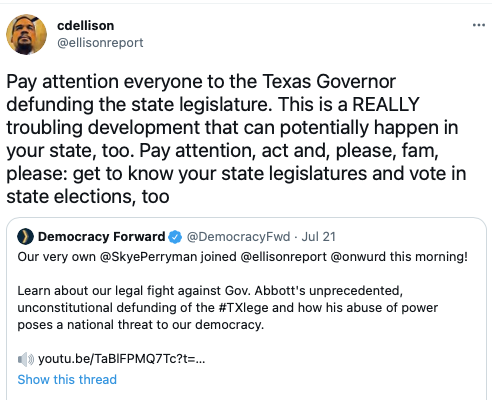 Protecting Medicaid’s Promise on the 56th Anniversary of the Law

Fifty-six years ago today, President Lyndon B. Johnson signed legislation that established the Medicaid program. Medicaid provides health coverage to more than 74 million Americans and continues, to this day, to be the largest source of funding for medical and health services for people with low incomes. Notwithstanding Medicaid’s life-saving role, it is under attack in states across the country.

On this anniversary of Medicaid, Texas Attorney General Ken Paxton is suing the Biden administration in an attempt to reinstate a nearly decade-long extension of Texas’ Medicaid waiver that the Trump administration rushed to approve during its last days in power.

So we filed an amicus brief in Texas’ lawsuit on behalf of Every Texan, urging the court to protect Texans’ say in how their Medicaid program is run.

As our filing explains, it is essential that officials hear the comments of all Texans before making major, long-lasting decisions about the state’s Medicaid program. Texas can now reapply for a waiver extension—and Texans can have an opportunity to comment on the proposed plan.

July marked the 30th anniversary of the Americans with Disability Act, and we’re honored to continue supporting the work of the Paralyzed Veterans of America with this latest public comment to advance accessibility and equity in air travel: 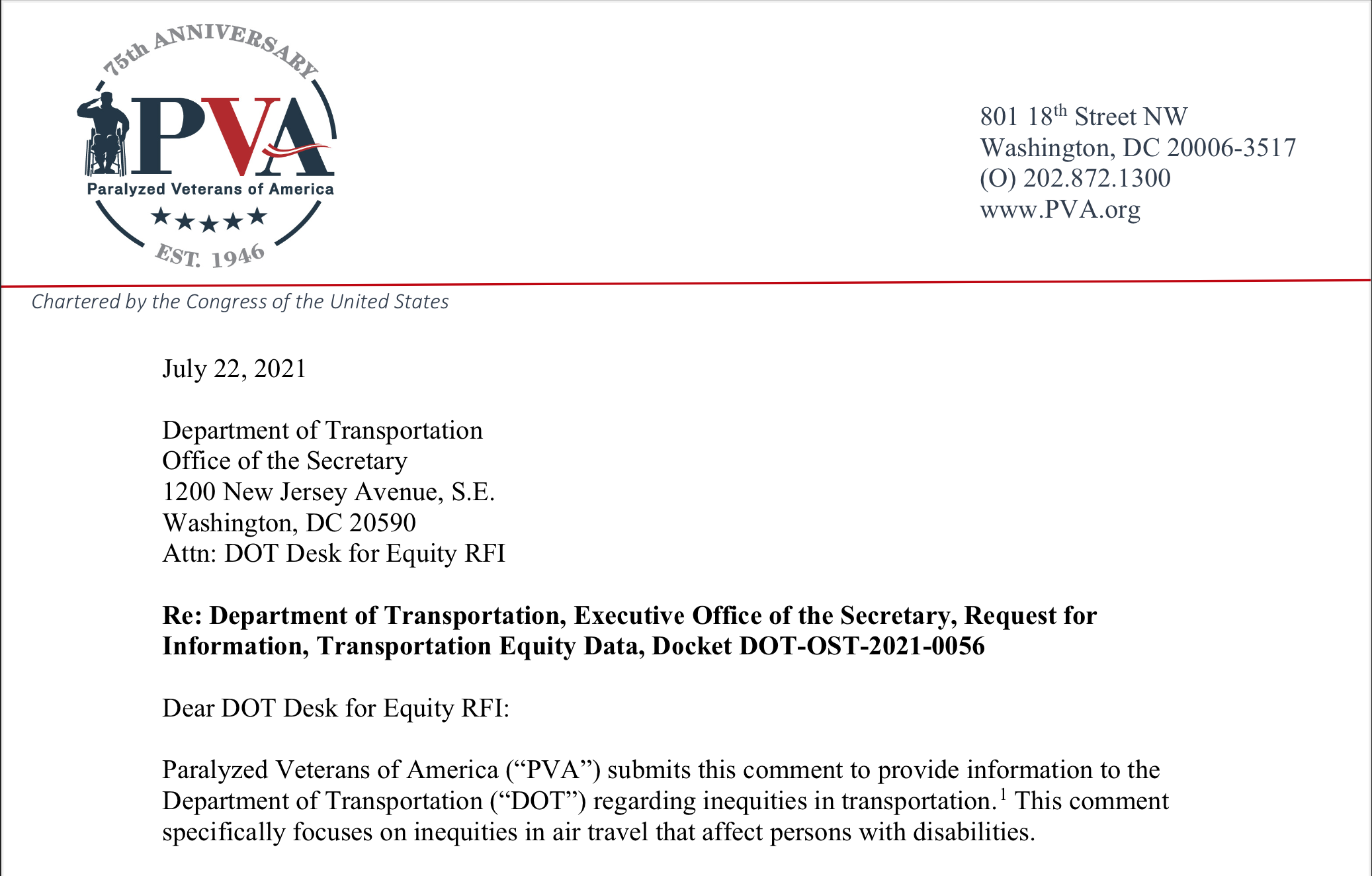 We agree: “People with disabilities have a legal and moral right to improved access to safe and efficient air travel.” Yet, as PVA detailed to the Department of Transportation, “airplanes do not have to have seats, walkways, doors, or cargo stowage spaces designed to meet the needs of passengers with disabilities.”

We’ve previously worked closely with PVA, fighting for travel accessibility and we’re grateful to work together again to help their voice reach the Department of Transportation!

As we move into August, our work will include engaging in the courts where attempts by special interests to undermine public health measures and threaten the health and wellbeing of people.

Our focused work fighting for democracy and social progress, for real people and communities, has only just begun. The threats are many, and voices need to be heard. Follow along on social media to stay up to date, and consider donating to support our work.

Thank you for being part of democracy’s future and our work to achieve a country as good as its promise!

Abuses of power must be checked — why we’re fighting in Texas and why it matters to you.